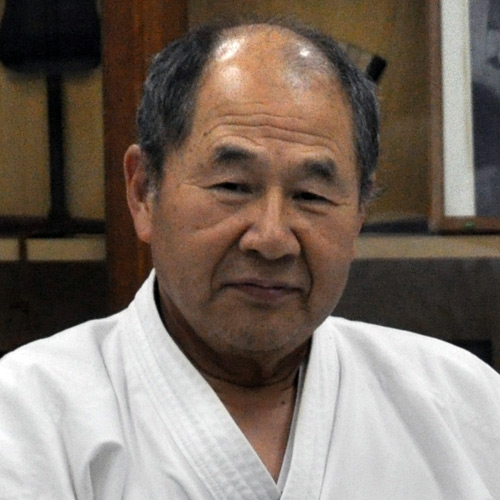 Kondo Katsuyuki was born in Tokyo in 1945. He began his training in Daito-ryu Aikijujutsu under one of Takeda Sokaku`s leading students, Hosono Tsunejiro, and in 1961 he received the first instruction from Takeda Tokimune at Hosono`s dojo. Later he became student of Yoshida Kotaro, who had been a Representative Instructor (kyoju dairi) under Takeda Sokaku. In 1964 he created an aikido club at Chiba Institute of Technology with Yoshida Kotaro as its adviser. In July of 1966 Kondo became a direct student of Takeda Tokimune and from that time he began making periodic visits to Hokkaido to learn directly from the Daito-ryu headmaster. Kondo also invited Tokimune to Tokyo to teach on various occasions. He continued his training under Tokimune for some thirty-two years.

In November of 1970 Kondo created his own dojo. Four years later, in 1974, Takeda Tokimune certified Kondo as Representative Instructor of the Headmaster (soke kyoju dairi). In October of 1982, Kondo relocated his dojo to the third floor of his company`s new building and named it "Shimbukan" (the name of the dojo was actually bestowed by Omori Sogen, a renowned Zen monk and Jikishinkage-ryu swordsman). In 1988, Takeda Tokimune appointed Kondo Katsuyuki, then the head of all Tokyo Daito-ryu Aikibudo Branches, to be both Representative of the Headmaster (soke dairi) and Director of the Overseas Headquarters (kaigai hombucho) in regard to Daito-ryu Aikibudo. That same year, Tokimune granted Kondo the menkyo kaiden (license of full transmission) certificate in Daito-ryu Aikijujutsu, thus formally passing on the Main Line Daito-ryu tradition.

During Takeda Tokimune`s illness and in the wake of his death, some of his students, who were supposed to do their best to preserve the school, left or started claiming their own Daito-ryu styles. In this difficult time, with the aim to preserve the Main Line Daito-ryu transmitted from Takeda Sokaku and Tokimune, Kondo Katsuyuki became the Head and General Affairs Director of the Daito-ryu Aikijujutsu Headquarters after being elected to this position by the heads of all Daito-ryu branches during a meeting in September of 1994. In July of 1995, Kondo was recognized by the Association of Japanese Traditional Martial Arts (Nihon Kobudo Kyokai) and Association for the Promotion of Japanese Traditional Martial Arts (Nihon Kobudo Shinkokai) as the legitimate successor to and head of Daito-ryu Aikijujutsu. Presently, Kondo is also a member of the executive board of the former association.

Kondo Katsuyuki speaks about the traditional method of teaching in Daito-ryu
" I heard many times from my teacher, Takeda Tokimune, that Takeda Sokaku sensei never taught the same technique twice. Tokimune sensei told me that at the time he was teaching as his father`s Representative Instructor, Sokaku would scold him for being "foolishly soft-hearted" if he taught too kindly or showed his students something more than once. My teacher often warned me, "If you teach the same technique twice, the second time your students will figure out how to defeat you with a counter-technique. Teach something different the second time.

They say that Takeda Sokaku taught those techniques to people that would suit their individual physiques. For example, there are stories about how he changed techniques he taught depending on whether a student was tall or short, stout or slim, strong or weak. But I doubt that is what really happened, particularly if we consider the fact that he made a point of never teaching the same technique twice. What I think did happen, though, was that Sokaku never gave sufficient explanations to his students, but rather showed a technique and left it up to each student to "steal" it as much as he was able to. Thus, Daito-ryu techniques vary according to individual interpretations of Sokaku`s students. I think that is the reality of what happened.

When my teacher Tokimune was still active and in good health, many of his students from all over Japan came to Abashiri once a year to take part in the annual Headquarters meeting. Several times, when I came to participate in the headmaster direct transmission seminars (soke jikiden kai) that were always held on these occasions, the meeting was divided into two groups, one taught by Tokimune sensei himself, the other taught by me acting as his instructional representative. Naturally, the day before these my teacher would go over with me in detail about what he wanted me to teach on his behalf, and he always told me that I must not teach the true techniques that I had learned from him. Even in regard to the very first technique taught in Daito-ryu, ippondori, I was strictly prohibited from teaching the real version I had learned directly from Tokimune sensei, and was told to teach only the version of ippondori he always taught in his own Daitokan dojo.

My teacher explained his purpose in this by saying, "What will you do if you teach people the true techniques and the next day they leave the school? The oral and secret teachings of Daito-ryu will flow outside of the school." He also said, "Out of a thousand people, only one or two are genuine students. Find them out and teach them what is real; there is no need to teach such things to the rest." My teacher only taught real techniques to a person if he could ascertain, from his questions, technical and physical ability, apprehension, and diligence, that they carried a sincere and genuine attitude. He inherited this method of teaching from Sokaku sensei.

Among explanations of aiki I heard from my teacher were "tsun" and "asagao" ("morning glory"). It took me several years to understand the meaning of asagao. Even now I cannot forget when my teacher told me "You did well", praising me for solving this riddle. These days, with my own students, I teach the same technique many times and I always hear my teacher scolding me from the heaven. There he is looking down on me and saying, "What a fool you are!"
It has been said by some that Tokimune sensei gave me special treatment. I think that besides being the first student who came to him in Abashiri from the mainland Japan, I won his favor by going to Abashiri several times a year, inviting him several times a year to Tokyo, taking time off work to train under him and accompany him twenty-four hours a day, and arranging everything for his stay in Tokyo.

Also, the only video recording means available in the early 1970s was open-reel black and white video with a recording time of about twenty minutes per reel. But I wanted badly to record what I was learning from my teacher, so I invested in an Akai video set that cost more than 1.5 million yen at the time. He used to come up to me when I was shooting him and say, "How do I look on TV?!"

Such training continued for me for twenty-three years, from the time I became Tokimune sensei`s direct student in 1966 until he was stricken with ill health in 1989. I still cannot forget how I traveled to Abashiri and Kitami over ten times in my ardent desire to see him after he was hospitalized. Looking back into the past, it feels like the thirty-two years that I spent with my teacher from the time I first met him in 1961 until he died in 1993, passed like a dream."

Portions of the text above have been adapted from "An Introduction to Daito-ryu History" by Stanley A. Pranin (appearing in Daito-ryu Aikijujutsu: Hiden Mokuroku Ikkajo by Kondo Katsuyuki. Sagamihara-shi: Aiki News. 2000).