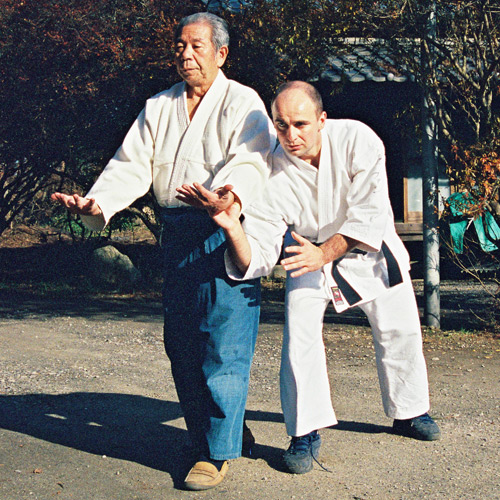 Morihiro Saito Shihan, an Aikikai 9th Dan, and one of the highest ranking Aikidokas in the world, began his Aikido education under Aikido`s Founder, Morihei Ueshiba, in 1946. Born in 1928 in Ibaragi Prefecture, the home and birthplace of Aikido, 18 year old Saito came to train under the auspicious O`Sensei until his demise in 1969.

In his 24 year tenure as an uchideshi to O`Sensei, the longest apprentice ever to serve O`Sensei, placed him as the only person to be continuously exposed to the intricate weapons training and open hand techniques under the Founder from the birth of Aikido in Iwama, until his death in 1969. As a result, he was one of the elite few instructors qualified to compliment the open hand techniques with the precision of the weapons. Inevitably, after years of commitment and direct tutelage from only the Founder, Saito Sensei became one of the most dynamic instructors in the Aikido world. He taught regularly at the Iwama Dojo in the absence of O`Sensei, and was also an instructor at the Hombu Dojo in Tokyo. In fact, Saito Sensei was the only person permitted to teach Aikido weapons, besides O`Sensei himself.

After the death of O`Sensei in 1969, it was inconceivable that any other but Saito Sensei succeed as the chief instructor at Ueshiba`s Ibaraki Dojo, and the guardian of the Aiki Shrine in Iwama. Since the passing of O`Sensei, Saito was the head of the Founder`s dojo in Iwama, Japan, and considered to be one of the world`s most prominent teachers of Aikido. Saito Sensei felt his responsibility to be that of preserving Aikido in its traditional form, as the Founder taught it in Iwama. One of Aikido`s foremost technicians, he was the acknowledged authority on aikido weapons training and taught traditional Aikido consisting of Aiki-Ken (sword techniques), Aiki-jo (staff techniques) and taijutsu (open hand techniques).

An extraordinary and altruistic tutor, Morihiro Saito Shihan travelled regularly to Australia, New Zealand, Italy, France, Germany, Denmark, Sweden, England, Portugal, and the United States, among other countries, conducting seminars worldwide to the growing number of Aikidokas that were mesmerized by the wealth of knowledge and technical ability shared by this profound teacher.

Author of the acclaimed six books on aikido, a Japanese-English five volume series entitled Traditional Aikido, and a short training manual entitled Takemusu Aiki, published by Aiki News, and a slew of Aikido videos, Saito Shihan has educated the world through these media, spreading the true teachings of O`Sensei in its unadulterated form.