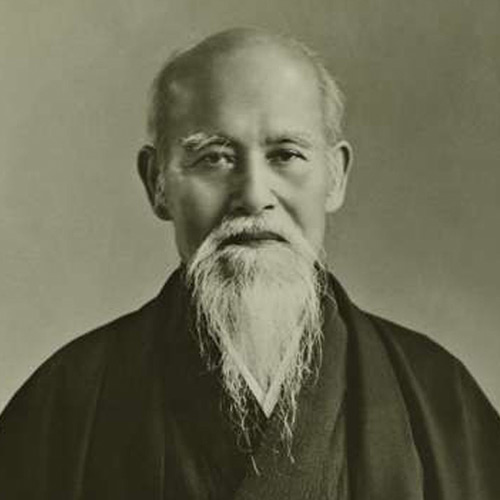 Morihei Ueshiba – O`Sensei (the Great Teacher) – is considered one of the world`s foremost martial artists due to his creation of the art Aikido. Aikido is the unification of immaculate techniques derived from years of training Kendo, Judo, and Jujutsu, in conglomeration with the profound spiritual insights stimulated by Ueshiba`s devout study of the Omoto Kyo religion.

O`Sensei was born on December 14th, 1883, in the Wakayama Prefecture. In 1902 Morihei fell under the influence of the eccentric scholar and environmentalist Kukamagusu Minakata. He inspired Morihei to contemplate the importance of seeing the world as an integrated whole, protecting the environment, while filling Morihei`s head with the many wonders and challenges of the world, knowing he possessed the courage for these quests. In 1912, O`Sensei moved to Hokkaido where he met and studied intensely under the renowned Daito-ryu master Sokaku Takeda. In 1919, in response to the critical illness of his father, Morihei returned to Tanabe, during which he encountered yet another great influence in his life, Onisaburo Deguchi, the leader of the flourishing religion grouping Omoto Kyo. After the death of his father the following year, Morihei returned to Deguchi as a pious pupil for the next eight years. It was this same year Morihei opened his first dojo teaching Daito-ryu Aiki-jujutsu, establishing it as the Ueshiba Academy.

In 1925 the great enlightening for O`Sensei came to him, a revelation that occurred after the defeat of a naval officer. This union of mind, body and spirit enabled him to understand the philosophical principles on which aikido was based. The transition of aiki-jujutsu (the martial art of aiki) now became aiki-budo (the way of aiki). By 1926, O`Sensei`s art was growing rapidly in popularity and he was often invited to teach the Admiral`s Court at the Imperial Court. In 1931 he opened the Kokukan Dojo.

With the oncoming Pacific War in 1941, Morihei re-established his headquarters in the Ibaraki Prefecture, and left the Kobukan in Tokyo in the hands of others. He had been purchasing land in Iwama since 1935, and now felt the need to preserve the spirit of Budo he had created for so many generations. He decided to reinstate the spirit of Aikido in the midst of Iwama for future generations.

It was here in Iwama that Morihei conceived the birth of the art now called Aikido. This inner sanctum of Aikido, as he so clearly described it, consisted of the Aiki Shrine, his home, and a dojo, all of which were completed in 1945. After the completion of the Iwama dojo, O`Sensei spent the majority of his days training in that dojo. He would leave only for lectures and seminars, and occasionally lectures/classes at the Tokyo Dojo, but nonetheless considered his own place to be only in the sanctum of Iwama. Although most of his time was spent in Iwama, in 1948, Aikikai in Tokyo was re-established and was recognized as the World Headquarters of Aikido, led by his son Kisshomaru Ueshiba and Koichi Tohei.

In 1960, Morihei was once again in the limelight of royalty as he was one of four martial artists to ever receive the Shijuhosho. This honorable award of achievement would be given to him by none other than the Emperor Hirohito. In 1964, he again encountered the Emperor in the event of receiving another award in recognition of Morihei`s contributions to the martial arts.

In the years to come, O`Sensei, still in pursuit of the development of Aikido, constructed the current Hombu Dojo in Tokyo, the largest Aikido organization in the world. Students from around the world rapidly increased, as Aikido was now a highly popular, well established art. Aikido dojos were well on their way to spreading what O`Sensei claims to be the aspiration of Aikido, world peace.

On April 26th, 1969, at age 86, Morihei Ueshiba was laid to rest, leaving a great emptiness in the hope of world peace. His ashes were distributed between the Ueshiba family temple in Tanabe, the Aiki Shrine in Iwama, the Ueshiba family cemetery in Ayabe, and at the Kumano Grand Shrine.