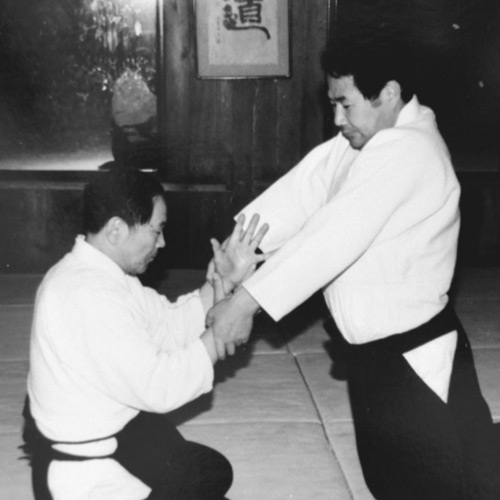 The history of Daito-ryu prior to the 19th century, as we know it today, is based on the written and oral tradition transmitted from the last two headmasters of the school, Takeda Sokaku and his son and successor Takeda Tokimune. According to this tradition, the name Daito-ryu can be traced back about 900 years, to Shinra Saburo Minamoto no Yoshimitsu (1045-1127), a warrior considered to have been the distant founder of the school. As a child, Minamoto Yoshimitsu lived in a place called Daito in Omi province (modern Shiga prefecture), and therefore was also called Daito Saburo. This is where the name Daito-ryu comes from.

Yoshimitsu studied classical Chinese military strategies like those of Sun Tzu and Wu Tzu, made his name as a military commander who had mastered sumo and aiki, and excelled in both literary and military arts. He also held a supervisory position in the Left Security Department of the Japanese imperial court. The "aiki" mastered by Yoshimitsu had been a secret art transmitted in the Minamoto family, which he continued to perfect and develop.

Aiki is said to have originated in the ancient art of tegoi, which is mentioned in an ancient Japanese myth about two gods, Takemikazuchi no Kami and Takeminakata no Kami. Recorded in Japan`s oldest written document, the Kojiki, (Records of Ancient Matters, compiled around 712 AD), this story recounts how Takemikazuchi no Kami took the hands of Takeminakata no Kami and "as if he had taken hold of a reed, squeezed his hands and threw him."

Tegoi is also said to be the origin of sumo (now Japan`s national sport), recounted in the legend of Nomi no Sukune and Taima no Kehaya in Nihon Shoki (Chronicles of Japan, 720 AD). During the Heian era (c. 792-1192) tegoi was transformed into a court entertainment known as sumai no sechie, which in turn subsequently evolved into sumo, practiced by warriors of the Kamakura era (1192-1333). Sumai no sechie was a sumo competition during which wrestlers from all over Japan competed before the Japanese emperor. Unlike modern sumo, however, there was no wrestling ring, and the techniques used were more combative than those used in sumo today. The combative character of the art at that point of time is clearly seen even from an imperial edict issued by emperor Nimmyo (810-850), saying that "sumai no sechie is not just an entertainment; it is an ideal means for cultivating real martial skills."

In 868, during the rule of Emperor Seiwa (850-880), administrative jurisdiction over sumai no sechie was transferred from the Ministry of Ceremonies to the Ministry of Military Affairs, officially marking sumo`s transition to becoming a true martial art. Tegoi training forms developed for protecting the emperor were inherited by the Minamoto family, which descended from Prince Tsunemoto, a grandson of Emperor Seiwa. The art was transmitted from Prince Tsunemoto to Minamoto Mitsunaka, Minamoto Yoriyoshi and finally to Minamoto Yoshimitsu.

Minamoto Yoshimitsu was awarded the rank of Kai no Kami (Lord of Kai province) for meritorious service during the Later Three-Year War (1083-1087). Late in his life he took the Buddhist name Gyobu Nyudo, and engaged in tempering his body and spirit through esoteric practices at Onjo Temple. He is said to have acquired unparalleled magical powers and divine presence. It was at this point that Daito-ryu shook off its origins in tegoi and came into its own as a distinct art.
From the Takeda family of Kai province to the Takeda family of the Aizu domain

Minamoto Yoshimitsu transmitted his art to his second son Yoshikiyo, along with the banner and armor traditionally passed down through the generations within the Minamoto family. Yoshikiyo`s grandson, Nobuyoshi, is said to have lived in the village of Takeda in Kitakoma County in Kai province, and thus adopted the family name of Takeda. This marked the beginning of the Takeda family of Kai province, a lineage that would last until Takeda Shingen (1521-1573), considered one of the greatest military generals of the Japanese medieval period. The art of Daito-ryu continued to be transmitted within the Takeda family together with the time-honored family banner and armor.

In February of 1574, almost a year after the death of Takeda Shingen, his relative Takeda Kunitsugu arrived in the Aizu domain of Mutsu province (part of modern Fukushima prefecture) bearing Shingen`s last will and testament. Here he entered the service of Ashina Moriuji, lord of the Aizu domain who had been one of Shingen`s allies. As an estate steward, Kunitsugu was granted 10,000 square meters of land in Nishi Aozu Muratakata. Here he lived in a place called Oike, maintaining a small force of fifteen cavalry men and ten infantry men. He also rebuilt the old and rotting Seinei Temple, which he reestablished as a branch of Aizu Tennei Temple and renamed Saiko Temple. From that time the Takeda family descendents of Kunitsugu settled in the Aizu domain. The Takeda family maintained the responsibilities as the chief priests of Aizu Ise Shrine (considered the protective Shinto shrine for Seinei Temple) and transmitted the secrets of Daito-ryu (also referred to as kogusoku).

During the Edo period (1603-1867), the first Tokugawa shogun, Ieyasu (1542-1616), officially recognized the Takeda-ryu (Koshu-ryu) military strategy of Takeda Shingen`s retainer Obata Kagenori (1572-1663). Since that time, the achievements of the Takeda family in politics, military affairs, economics, and other fields were incorporated into policies of the Tokugawa government with successful results.

Tokugawa Ieyasu`s grandson, Komatsumaru, became an adopted child of Takeda Shingen`s fourth daughter Takeda Kenshoin, and devoted himself to the practice of the Takeda martial arts. Later he became an adopted child of Hoshina Masamitsu and took the name of Hoshina Masayuki. In 1644 Hoshina Masayuki (1611-1672) was appointed to be the lord of the Aizu domain. He was famed as a wise ruler who governed successfully with great care and skill.

According to the will of the third Tokugawa shogun Iemitsu, in 1651 Hoshina Masayuki became the guardian and adjunct of the eleven-year-old shogun Ietsuna, assuming the title of Great Councilor, the highest post in the Tokugawa government. From that time and for the next twenty years he supervised political affairs in Edo Castle. During this time he reformed the Daito-ryu transmitted to the Aizu domain by Takeda Kunitsugu to accommodate peacekeeping needs within the castle precincts. Namely, he initiated a system referred to as oshikiuchi, a self-defense system to be taught to senior councilors, shogunal retainers, and certain castle workers.

Furthermore, Hoshina Masayuki also mastered the Ono-ha Itto-ryu school of swordsmanship, studying under Ono Tadatsune, the instructor to the shogunal family. Both of these arts, Ono-ha Itto-ryu and oshikiuchi, he transmitted to the succeeding lords of the Aizu domain. In particular, he entrusted the teachings of oshikiuchi to those Aizu domain senior councilors bearing the surname of Saigo, a family that originated with the Saigo family of Mikawa Province (modern Aichi prefecture).

The Takeda family bloodline continued from Takeda Kunitsugu to Takeda Chikara, Takeda Nobutsugu, and after another four generations was inherited by Takeda Soemon (? - 1853). Soemon studied the arts of yin-yang divination (ommyodo) in Kyoto under the Tsuchimikado family, who were descendants of renowned diviner Abe no Seimei (921-1005), eventually receiving a menkyo (license of mastery) certificate and obtaining the title of Takumi no Kami. After returning to Oike in the Aizu domain he served as the chief priest of Aizu Ise Shrine and was known both as an expert in the Shinto religion and yin-yang divination and a master of Daito-ryu. He taught these arts in different places, and also transmitted secret teachings to the Aizu domain councilor Saigo Tanomo.

Soemon`s firstborn son, Sokichi (1819-1906), inherited a piece of cultivated land that had been passed down through his family. He practiced sumo, kenjutsu (sword), bojutsu (long staff) and Daito-ryu. Having obtained a special domainal permission, Sokichi embarked with two other young men on a self-training journey around Japan, earning for himself a reputation as a man of valor. After his return, he obtained the title of ozeki, the second-highest rank in the sumo circles of the Aizu domain, and was granted the sumo name Shiraitozeki by the lord of Aizu. Sokichi was also an educated man who ran a local elementary temple school (terakoya) and taught martial arts in a dojo on his property. He was known for his courageous participation in the Battle of Hamagurimon (Kimmon) in Kyoto in July of 1864, and also in two punitive military expeditions made by the Tokugawa bakufu against the rebellious Choshu domain in 1864 and 1866. Sokichi also participated in the Battle of Toba-Fushimi in January of 1868 and in the Shirakawa battles in April-July of 1868. During the latter he led a Sumo Wrestlers Corps that had been incorporated as part of the artillery force.