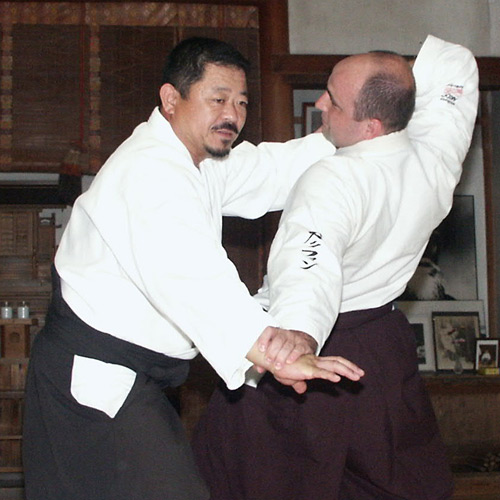 Hitohira Saito Soke, began his Aikido education at the tender age of seven under the direct tutelage of the Founder, Morihei Ueshiba. He continued this training under O`Sensei until the master`s demise in 1969, at which time he automatically continued his learning under O`Sensei`s chief disciple, his own father, Morihiro Saito, 9th Dan.
During this period, he attended various schools to study religions of all denominations, in particular the Omoto-Kyo religion, this religious path was the same taken by O`Sensei and which aided the latter in the development of Aikido. It was also during this period as well that Hitohira schooled in Sendai, training under Hanzawa Sensei, and practicing in Osaka with the famous calligraphy teacher and Aikido student of O`Sensei, Abe Sensei. To further emulate his teacher, Hitohira also practices daily chinkon kishin to enhance his daily life and being.

Until his father`s demise in May 2002, Hitohira Saito taught weekly in the Tokyo Dojo and trained constantly in the Iwama Dojo. There are many technical photos in the late Saito Sensei`s five volumes of "Traditional Aikido" which portrays Hitohira not only in the displaying of techniques, but also as a technician as well.

Hitohira is the only son of Morihiro Saito and the heir apparent to his father`s legacy. He has not only managed to maintain the quality and structure of Iwama Style Aikido, but also excels at being a dedicated father to his five children and a loving husband to his wife Hisako Saito. Hitohira has earned the respect and admiration of his peers in his own right, and commands the highest respect within his community through his many years of charitable contributions and community service, and his enthusiastic support of and participation in all the local traditional arts and customs such as the Matsuri festivals.

Hitohira Saito Sensei is not only a divine teacher, but also a gifted sculptor, painter, and calligraphist wherin he was taught by the same teacher as O`Sensei, Seiseke Abe Sensei from Osaka. To further explore his desire for the arts, Hitohira is also a professional Japanese Chef, a field which he studied for three years and founded his own Soba restaurant in Iwama. Unfortunately, due to his obligation to the teaching, the practice of Aikido and to his father`s legacy, he chose to retire the restaurant and is currently utilized as part of the uchideshi quarters.

Hitohira Saito Soke, founder of the Iwama Shin Shin Aiki Shurenkai in Iwama, Japan, has taught thousands of foreigners serving their apprenticeships in this Mecca of Aikido, the Iwama Dojo. Devoted to preserving the spiritual and technical tradition of O-Sensei`s Aikido, Hitohira has established a reputation for unparalleled technique and teaching methods. He conducts worldwide annual seminars in Slovakia, Italy, Russia, Denmark, Sweden, Chile, Australia, the United States, Japan, France, Germany, Portugal, Turkey and continues to deliver aikido to an audience that is so fortunate to receive his unsurpassed spiritual and technical expertise.